How a touring team of volunteers won games,

earned credibility, and almost had an international incident

Like many other groups during the early days of the Peace Corps, the Colombia IV physical education/coaching volunteers had a credibility problem. How do you assign American volunteers to universities throughout Colombia and expect students (and faculty) to accept instruction from young people no older than themselves with still-developing Spanish language skills?

The Carrasco Effect
Eliseo (Ellis) Carrasco, the bilingual native of El Paso, Texas, had been a hall of fame high school coach in California before signing on with the Peace Corps as director of Colombia IV. His teams won state championships in football, basketball, and baseball, and he did it with players of diverse cultural and economic backgrounds. His reputation as a leader, diplomat, and problem-solver continued to grow with his Colombia IV assignment.

It was Carrasco, along with Peace Corps Volunteer (PCV) group leaders Dr. John Roberts and Rudy Salinas, who came up with the idea of a touring Peace Corps basketball team. By performing well on the court and then conducting professionally-organized clinics, Colombia IV would become better-known and more credible as a teaching/coaching group. An official Peace Corps basketball team had never been tried before, and it hasn’t been done since. 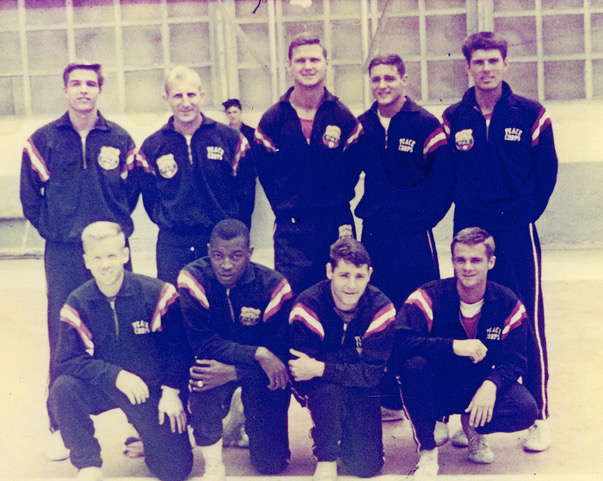 Loaded
The next problem was to put a team together from among Colombia IV’s 27 physical education (PE) volunteers who were good enough players and teachers to make an impression. Carrasco didn’t know it until tryouts were held in Bogotá, but Colombia IV had more than enough basketball talent. In fact, it was loaded.

Don Curry was a 6’ 5” forward at the University of Southern Mississippi drafted by the St. Louis Hawks. Kevin Dixon, a 6’ 7” center/forward, had lettered in basketball and baseball at the University of Denver. Bob Atkins played at Xavier University in New Orleans. David Bohnke was a swimmer, basketball player, and PE major (one of only two in Colombia IV) at Slippery Rock.

Bob Willey, a sharp-shooting forward, would be asked to play professionally in Colombia after his Peace Corps tour. Jim Brown was a three-time college tennis conference champion at McNeese State before transferring to Baylor, but he was just as comfortable on a basketball court. Mike Town (rower, boxer at Stanford) and Bill Cornwell (wrestler at Delaware) were well-rounded athletes who were rebounders, defenders, and, when needed, enforcers. Dr. Roberts was named player/coach.

Classic Warm-Up Uniforms
The entire Colombia IV PE group (and other PE groups afterwards) got those great red, white, and blue Peace Corps warmups, which on the tour got almost as much attention as the players. Some spectators wanted to touch them. Just a guess, but the warmups first worn in 1963 are still in closets and trunks today.

It Started in Pasto
The first game was in Pasto. The flight was scary, the weather cold, and the altitude high (8,291 feet). Bill Cornwell, who was coaching the university team there, was worried that his team might beat Colombia IV, which would have been a disaster for credibility-building. Bill was wrong. Colombia IV led at the half by 30 points, went on to win easily, and headed north.

Treated Like Rock Stars
The team played before sellout-size crowds in Popayán, Cali, Bogotá, Medellín, Bucaramanga, Cartagena, Barranquilla, and other cities. Games were played in coliseums, at colleges, academies, schools, and one military base—sometimes indoors, sometimes outdoors, and once on a dirt court. In the accompanying clinics, Colombia IV taught players, teachers, coaches, men, women, kids, and even spectators who wandered by.

At every stop, the team was warmly—sometimes wildly—welcomed. “We were treated like rock stars,” says Dixon. There were no incidents—well, almost no incidents—and totally positive experiences for both players and students. After games and clinics, PCVs and Colombians mixed, talked, listened, and perhaps narrowed the gap between two cultures. 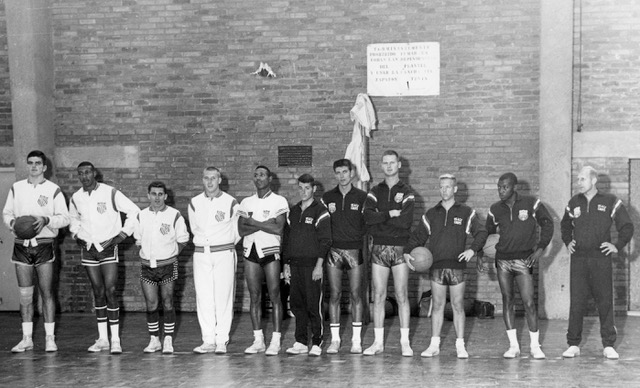 Then Barranquilla Happened
The last two games of the tour were to be played in Cartagena and Barranquilla against the cities’ respective university teams. Colombia IV, still undefeated, narrowly beat a good Cartagena team the first night. The next day they learned that they would be playing the same team they had just defeated. The difference was that several international-level players had been added to the Cartagena roster.

By the time Colombia IV entered the stadium, the crowd was in a frenzy. Loud speakers played music at full volume. Radio broadcasters were seated courtside. Players were introduced, followed by the national anthems of both countries. It was not just a group of Peace Corps volunteers playing a “friendly” against a local team, but rather a full-blown Colombia-versus-the USA contest.

Play was rough from the start. Lots of body contact and few whistles. Colombia IV’s two big men, Curry and Dixon, had four fouls before the end of the first half. Near the end of regulation time, things got worse—pushing, shoving, flagrant fouls, and a couple of near-fights. One player was ejected, and Colombia IV lost in overtime.

By the next day, word of the incident had reached Bogotá. The U.S. Ambassador, the Peace Corps Director, and Carrasco reviewed what had happened, and as a result, no further games or tours were planned. The players returned to their respective cities and resumed their regular university duties.

Six Colombia IV players later participated in an instructional tour with a State Department-sponsored team of U.S. college all-stars, but neither group competed against local teams. And five of the Colombia players served as the first ever official statisticians at a Colombian national basketball tournament.

An Early Boost
With the exception of one night and one game, the Peace Corps basketball team tour had achieved the goal set by Carrasco. “Following the success of the team, sports bureaus in all 32 Colombian departamentos (states) requested a Peace Corps PE volunteer,” according to Colombia IV track and field coach Gale Gibson. “Ellis then had to deal with a personnel shortage, but that’s another story.”

After Colombia IV
Dr. John Roberts returned to the U.S. and later became director of graduate studies in physical education at the University of Missouri. Ellis Carrasco stayed in Colombia to lead other PC projects, then coached the Colombian National Basketball Team, and eventually served as Peace Corps Director in Panama, Dominican Republic, and Chile.

Friendships and professional relationships made in Colombia lasted for decades after Colombia IV, and other Peace Corps groups continued its work. Five members of Colombia IV married women from Colombia.

Colombia IV has had five reunions over a 50-year period. With the help of Friends of Colombia and RPCV Kay Dixon (Colombia III), a sixth (Zoom) reunion was held in November 2020. Seventeen RPCVs, plus spouses, participated in the two-hour session.