It was poor Marquesa

El Valle didn’t surprise us. There had been no site survey. Fritz didn’t know much about it either, except that they grew rice and were desperately poor. He also figured we were seasoned volunteers who didn’t need an orientation. The houses stood on stilts and had straw roofs. The main dirt road in town couldn’t have been more than a third of a mile long. No electricity except with a generator. And, an odd-looking concrete building with a high steel tower on top. It reminded me of the pulsating tower on top of the world in RKO Radio movie opening credits. That’s what it was, a short-wave radio link between this sorry town and civilization. We drew comfort from that. We settled in. The people were friendly, if reserved. They were almost all dark-skinned, descendants of slaves brought into the Choco to work the gold mines. Except that the few entrepreneurs – Pilar who made our meals; the store owners, two of them, and the town leader, a Don Rinaldo, Hispanics all. For some days we walked around, introduced ourselves and learned about the town and the rainforest. The forest looked forbidding to me. It had a deep golden haze in the late afternoon sun. Then it turned gloomy just a few feet in from the edge. There were Cholo settlements along the rivers. They were the original native people, short and tan-skinned. They came to town on Sundays. Some wore face paint, a kind of blue paste. Blue paste, here?  The forest, the jungle frightened me; dense and tangled with strange things. There were probably jaguars and large snakes. We swam in the warm Pacific, fished with the kids using huge nets. Most evenings after supper we sat on the beach to watch the spectacular, quick sunsets. We started some activities. I spoke to a few small groups of men; some owned rice farms along the river. They had a vague sense of a cooperative, how it is formed and why; how it could work in their favor. I saw that I had my work cut out. Dan began organizing sports programs for the kids: teams, competitions. They loved it. Meanwhile Marquesa was having a time of it. It was all new to her: the ocean, new things to smell; shoreline birds to chase, except the pelicans. Sometimes she’d disappear for hours but always found her way back. We weren’t worried about her. At bed time she’d curl up at the foot of the cots. We spent our nights reading, playing chess by the kerosine lantern. I was reading an English language article about this government project launched a few years earlier: SETI, The Search for Extra Terrestrial Intelligence. How about that? One morning we woke to find Marquesa not looking well. She was listless and was panting; probably something she ate. We had much to do that day. I was going to make the twelve-mile round trip to Bahia to see about a bank. Dan was to finish building the outhouse. After breakfast we shut her in the shed with a bowl of water and some food. In late afternoon I got back and saw that Dan had done a great job. I walked on. He was sitting on the front steps of the shed playing with Marquesa. She looked better. She was energetic, her eyes were bright, almost dazzling. She drank all the water. We were tired that day, so a while after supper and a stop along the beach we called it a night.  I continued reading about trying to hear from those little green men. I was also reading a scifi book called the Moon Pool, not very good. Hours into the night a loud terrifying screech woke us. Some creature got in and was tearing Marquesa apart. On the third try I got the lamp lighted. It tore at my heart when I saw her. She was in great agony, her back was arched. She was foaming at the mouth and falling down, her face contorted. That told us there was something very wrong. Dan yelled she has rabies. We jumped on the cots and held the pillows for defense. Then he did something I doubt I would have had the courage to do. He took a two by four, jumped off the cot, braced himself and smashed her skull in with one powerful blow. Blood ran from her mouth. Her head turned toward us, as if to say help me. She fell to the floor dead. Dan let out a deep sob. Poor Marquesa! We stood there in shock. Dan, sad and tear-eyed, said that we had to bury her. Getting her skull tested was impossible. Saw our dog’s head off? And where to take it, Medellin?  We knew rabies was endemic in the Choco, as we knew there was malaria. We took pills for malaria. There were no pills for rabies. Encounters with it were rare, and so, it was an abstract notion. Yet, almost certainly, here it was. Carried by vampire bats that sucked the blood of their victims. We wrapped her in a sheet and dragged her off to the beach. We buried her deep and far off. Some of the dogs began howling. What did they sense, a killing of one of their own? 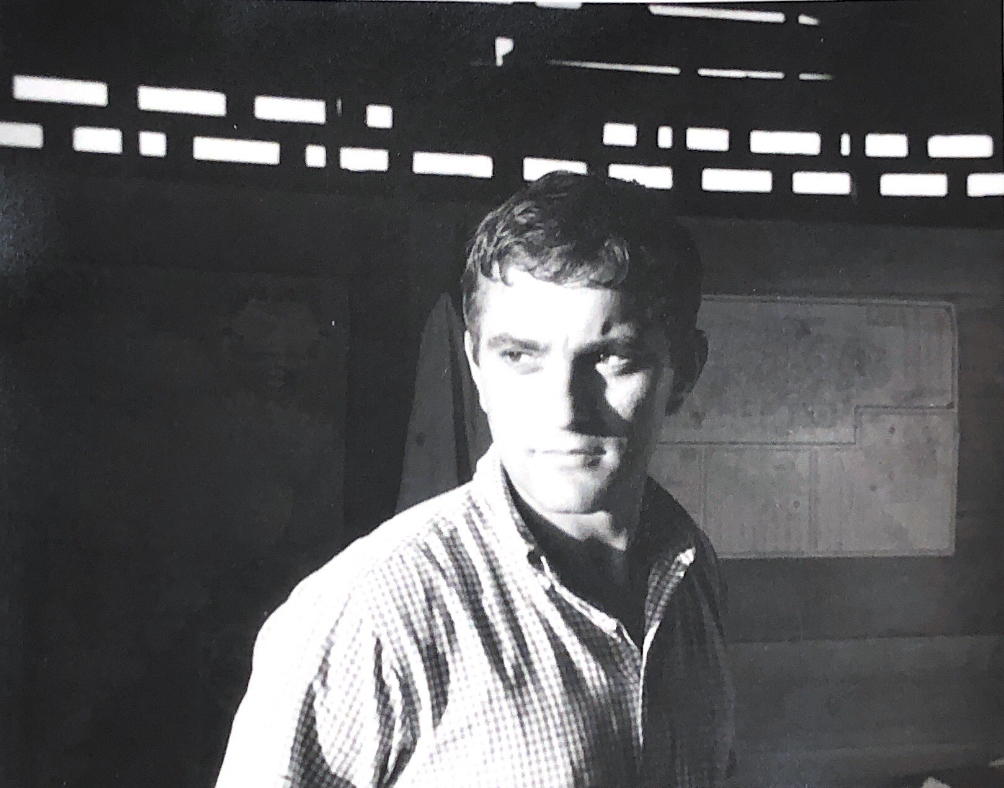 We came back and sat on the steps, nervous wrecks. The cool wind that precedes the dawn came and washed over us. Dan began looking at his hands: cuts and abrasions from his work. I had some too. Broken skin! I said “ten days,” the window you have to begin treatment for rabies, beyond which you  were to keep the victim sedated and restrained if necessary. At nine, somewhat recovered, we sent a wire to Dr. King in Bogota. Dan wrote it and ended the message with “siempre nos lamia.” She was always licking us. Two days later, still with time, but with urgency, we flew to Quibdo and then to Medellin, where at the Cliniica Soma at ten in the morning for two weeks we were given an abdominal injection for rabies. Just a bit of pain, it was the two-inch needle, not the five-inch horror of rabies lore. We were on extra pay, a per diem for our troubles. We needed the time in Medellin badly. Nothing was expected of us, except to relax, treat ourselves, clear our minds and not die. Still alive, recovered, we returned to El Valle pumped up with anti-rabies compounds. By then everyone in town knew about it. They were sympathetic, they waved and smiled more often. They put aside their natural reticence and began calling us Don Daniel and Don Guillermo. A few days back I began to feel wistful; something was nagging at me. Certainly, we experienced a terrible, disorienting shock that would have affected anyone. But, it was more than that. I couldn’t grasp it. Then it came to me that the sad, tragic death of Marquesa, an animal we loved, must have affected us more deeply than we imagined. That heavy burden was lifting us. It concentrated our minds. It was why we now felt closer to the people and the town. It happened there, they were sharing our sadness.  Our purpose took on greater significance. We engaged more with the them: a chat, a beer, chess, laughter. We moved into our new house, cleaned and painted; new doors, screens, chairs, a table. We did more. We met the next-door neighbor: Timoteo Blancqueset. One morning his grandson appeared with a huge rat bite on his forehead.  There it was, a deadly disease had come out of the jungle and attacked us. We faced it with dread and courage. We defeated it, and rather than get out of there for good we returned happy and in good shape. We had months to go before our service was completed; there was much to do. Not least of which was the launching of a rice cooperative. Three weeks later we rented a truck and waited at the air strip for Fritz and Lynn Bramkamp. Bramkamp was the country Director of our group, Colombia VI. The good Father put them up in a room at the church. On the mild, sunny Sunday afternoon twenty men gathered under the church tent. Father Ignacio blessed the event and the cooperative and admonished them to work hard to make it a success; it could mean an improvement in their lives and the life of the town. Fritz stood up, and in his German-accented Spanish told them about what a cooperative means, how it will function. Then each man went up to the desk and signed the book. Some signatures were not more than squiggles. They reminded me of Kwi Kwag’s mark when he signed up to hunt the Whale. The next day we drove Fritz and Lynn back to the airstrip and waved goodbye. They had high hopes for this daunting task. Maybe it could work but, most likely not before I departed. Not all that much was accomplished. There were visits to farms along the river. Inquiries were made in Bahia about selling the rice in Buena Ventura. It became difficult to get the men to sit for meetings. El Valle however, became a site volunteers wanted to visit to experience the real deal. Four came to spend Thanksgiving. We arranged for a store owner to roast a pig. It was a happy time. We swam, drank beer, laid out. About two in the afternoon we sat at our table and dug into the lean succulent roast pork. After dinner we kicked back with smokes and rum and surmised about what effect the PC might have on Colombia. About two hours later the pig began to smell; it was corroding quickly. The heat and mal nourished livestock in the tropics. And so it went; easeful days, more visitors. Until it began getting close to checkout time. Surprise, Bramkamp offered me a Leader role in the interior. Appreciate it but no thanks. I was ready to wrap it up. Our replacement group was on the way. I had made arrangements to catch the Spring semester in the graduate program in English at the University of Wisconsin, Madison. I was a history major and had to take makeup courses: Shakespeare, Chaucer and Milton. Sounded good to me. Dan signed up to be a mate on Chris Sheldon’s around the world sailing trip, a school at sea program. He asked two things of Chris: let him grow his beard and teach him celestial navigation. Yet another unique challenge for Dan. I had found peace. My time in Colombia was a special, once-in-a-lifetime episode. The enduring pull of the town and the dark forces of the rainforest brought me around. But, in truth it was really poor Marquesa’s dying that showed me the way out.