Today’s the day we check the Desfile de Silleteros from our bucket list.  From my youngest years, I have loved parades. When my childhood playground program featured a pet parade, I was one of the first kids to line up to see it. When my town’s volunteer firemen’s drum and bugle corps practiced marching through my neighborhood on summer evenings, I was there twirling my baton hoping they would notice and invite me to march along; they never did.

For several years, I chaired a Fourth of July parade and celebration on Cape Cod with nearly 1000 participants and that drew more than twenty thousand spectators (in a community of five thousand people).

Yes, as a Peace Corps Volunteer, I lived in Medellin for two years and never experienced this parade and its festival. ¡Qué lástima! as the Antioqueños would say. Now Kevin and I returned to Medellin for this parade. We embrace every facet of this festival. Every day, small festivities take place leading up to today’s grand performance, the Flower Parade.

The tradition of silleteros is rooted in the 1800s when campesinos in the rural mountains of Antioquia used silletas to carry the sick and elderly. A silleta is a chair-like contraption that people tote on their backs. Then flower farmers began to use silletas to carry flowers and vegetables to market in Medellin. And they used their silleta to take their purchases from Medellin back to their homes in the countryside.

In the 1950s, the Medellin Board of Tourism developed the five-day Feria de los Flores to promote Medellin tourism and the Colombian flower industry. Initially just another fiesta in Medellin, it is now one of the world’s best parties.

At each morning’s breakfast buffet, our hotel staff greets us in costumes of red, yellow and blue, the colors of the Colombian flag. The women wear flowers in their hair, white peasant blouses and billowy skirts over starched lacy crinolines discreetly peeking out underneath.  Men sport white shirts with puffy sleeves, colorful neck scarves and cummerbunds along with their gaucho hats. Fresh flowers adorn our tables. The hotel dining room opens onto the street, taking full advantage of the city’s year-round spring climate.  We breathe in the fresh morning air with hints of jasmine. We hear the sounds of the city awakening: passing traffic, horns honking, chiming church bells, an occasional rooster crowing. We linger over our perfect café con leche, knowing this breakfast treat can never be duplicated Stateside.

In the evening hours, we wander to the nearby public parks exploding with activity. Multiple outdoor performers entertain. Youthful breakdancers challenge each other for the most daring moves, graceful tango dancers circle and dip on a nearby stage. Impromptu sets of Cumbia dancers bow, curtsy and weave about to the traditional music of drums and flutes.  Wandering musicians meander along the streets, now open in the evenings for pedestrian traffic only. From our vantage point in a nearby open-air café, we are content wallflowers relishing the carnival.

It’s very early on parade day when our tour guide and driver greet us outside the hotel. We barely had time to finish our breakfast before they arrived. Loaded down with cameras, water bottles, sunscreen and sun hats, we scramble onto our Volkswagen bus. Our driver navigates through the mobs of groups and families beginning to fill the streets.  Carrying picnic baskets, folding chairs and sun-brellas, they wind their way to the parade route.  We feel lucky: our travel agency has purchased grandstand seats in the shade, but we still must find them. In this city of four million people, I am sure nearly one million will see the parade from somewhere along the route. Festive pandemonium reigns.  Police and members of the military efficiently keep the traffic moving. 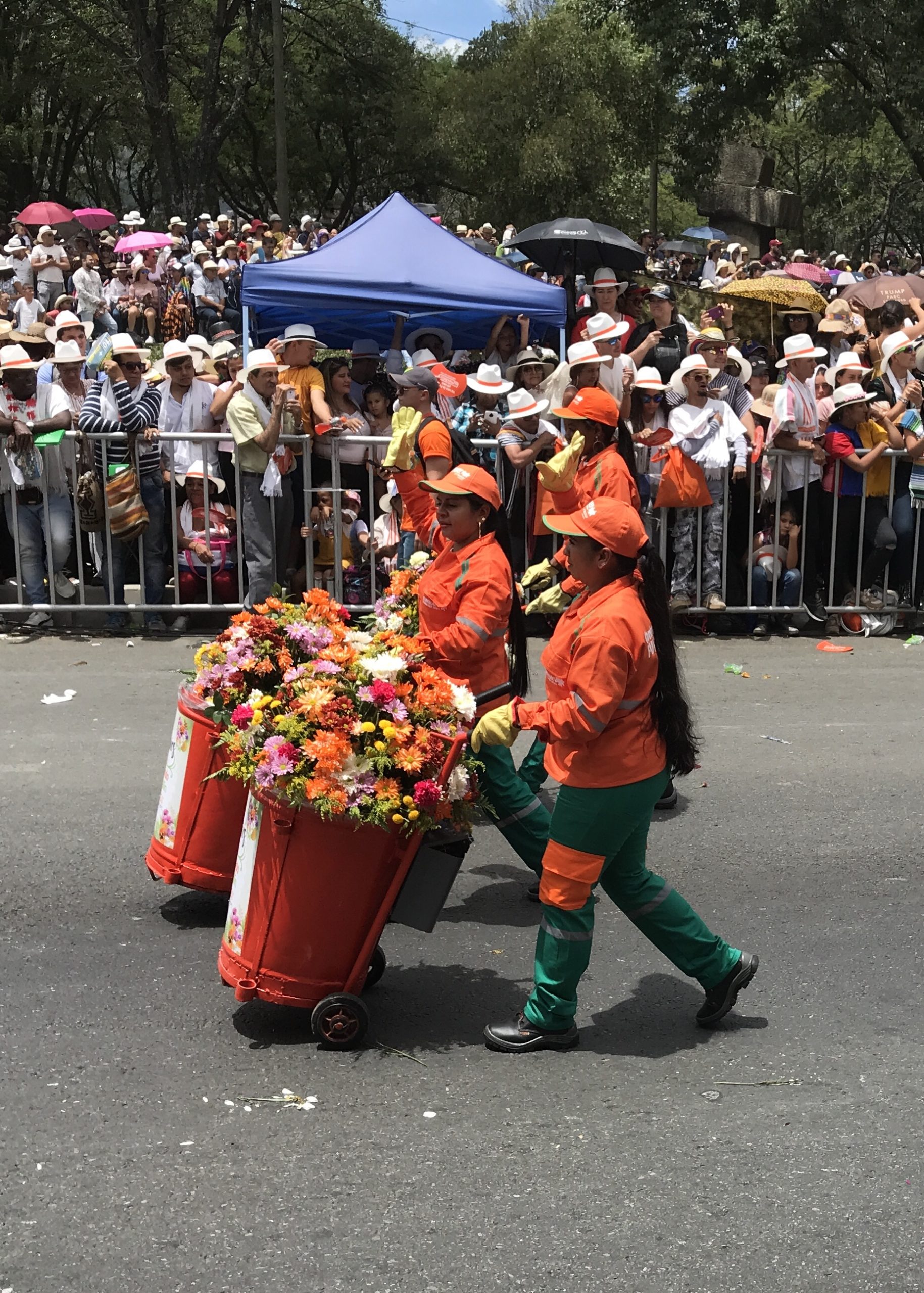 Landing in our prime viewing seats, the official start of the parade is hours away. We settle in to people watch. Determining the foreign tourists from the local Colombians entertains us. Colombians, especially the women dress modestly and elegantly, while foreigners, here on holiday, are more casual in their attire. Everyone is in party mode.  On the sunny side of the street, the empty spaces quickly fill in. In no time, people are shoulder-to-shoulder whether standing or sitting.

Long before the parade commences, the temperatures heat up as the sun beams down. Vendors pass by selling cold beers, soft drinks and water. The man pushing the ice cream cart never reaches our section. Other vendors hawk souvenirs. Well-prepared parade spectators down beverages from their coolers. Thousands of freebie hats and sunshades from corporate sponsors are tossed to anyone who puts out their hands as the distributors pass by.

An antique first baseman, Kevin’s long reach is still able to catch several of the giveaways and redistribute them among our fellow tourists.

Overhead helicopters hover above the masses. Some are military and some are television production crews.

In due time multiple sirens and whistles blast through the air. All along the street, the crowd applauds and cheers as Medellin police vehicles leading the parade slowly cruise by.

For the next two hours, we are treated to a procession of representatives from each of the military forces, the police units, and firemen in Colombia.  Male units and all female units are interspersed with musical ensembles on floats, marching bands and dance teams. The spectators welcome and cheer for each group. A squad of female garbage pickers with floral decorated trash bins pass by.

“Where did all these marching units come from? And how did they get them all lined up? Where are their busses parked?” Kevin and I ponder as we recall some of our logistical nightmares of years ago.

“Look how the women are so smartly dressed, even in their uniforms. Their hair and makeup immaculate. Some are even marching in high heels. Wow!”  Yes, we are close enough to admire these details.

Multiple uniformed legions of young people march by. The spectators applaud. Why are they being so wildly cheered? Dressed in matching bright colored tee shirts and denim jeans, they seem an unlikely group to generate so much enthusiasm. Later in the day, we learned their role and we too applauded their presence.

Then, nearly noon, all parade activity stops. The sun is high in the sky and it is hot. What is happening?  Where are the silleteros? We have yet to see one silletero. No one seated on our tourist bleachers knows anything. In the nearby porta-potty line, we learn the answer. This is a planned break in the action – time for lunch and bio breaks.

On schedule, the second part of the parade begins soon after we have some nourishment and enjoy our bio break.  Now is the time of the silleteros. Nearly 500 units march today in the 1-½ mile parade.  The units are divided into multiple categories: traditional, commercial, artistic, youth.

1957, the first parade of silleteros, it is said that forty men carried flower arrangements on their backs through the city to an exposition display at the Catedral Basílica Metropolitana.

Traditional silleteros lead the procession. Many in this first group are women. Earlier in the week, with our tour guide we had met one of the most senior woman sillateros when she led a workshop demonstrating how the silletas are built.  Silletas from her workshop have appeared in the parade for more than 40 years.  She herself has carried a silleta for several years and earned multiple awards for her work.  We cheer loudly when we spot her. She smiles broadly as she strolls gracefully along the route.  In her provincial dress of white with red trim, with her white kerchief, she carries her silleta. With great pride she turns in multiple directions so we can examine and photograph her silleta, a circled array of yellow chrysanthemums, red carnations, deep violet and pink petunias with white calla lilies.

“Here, Kevin, here’s my phone/camera. Snap some pictures. You are better positioned to take photos.”

From above, helicopters again fly by and drop massive amounts of rose petals over the parade route. The Colombians seem unimpressed by the appearance of the helicopters, but we tourists marvel at this added detail to the celebration.

More silleteros follow.  Some are carried by men, others by family matriarchs and patriarchs.  Even children carry smaller ones.  All are original designs assembled by the people who are carrying them. Just when you think you have seen the most beautiful ones; the next ones are even more spectacular. Arrangements of white calla lilies, petunias, violets, roses, hydrangeas and sun flowers appear.  All the marchers move with dignity and turn multiple times toward the spectators enabling us to view their creations.  Dancers and marching bands are interspersed among the groups of silleteros. 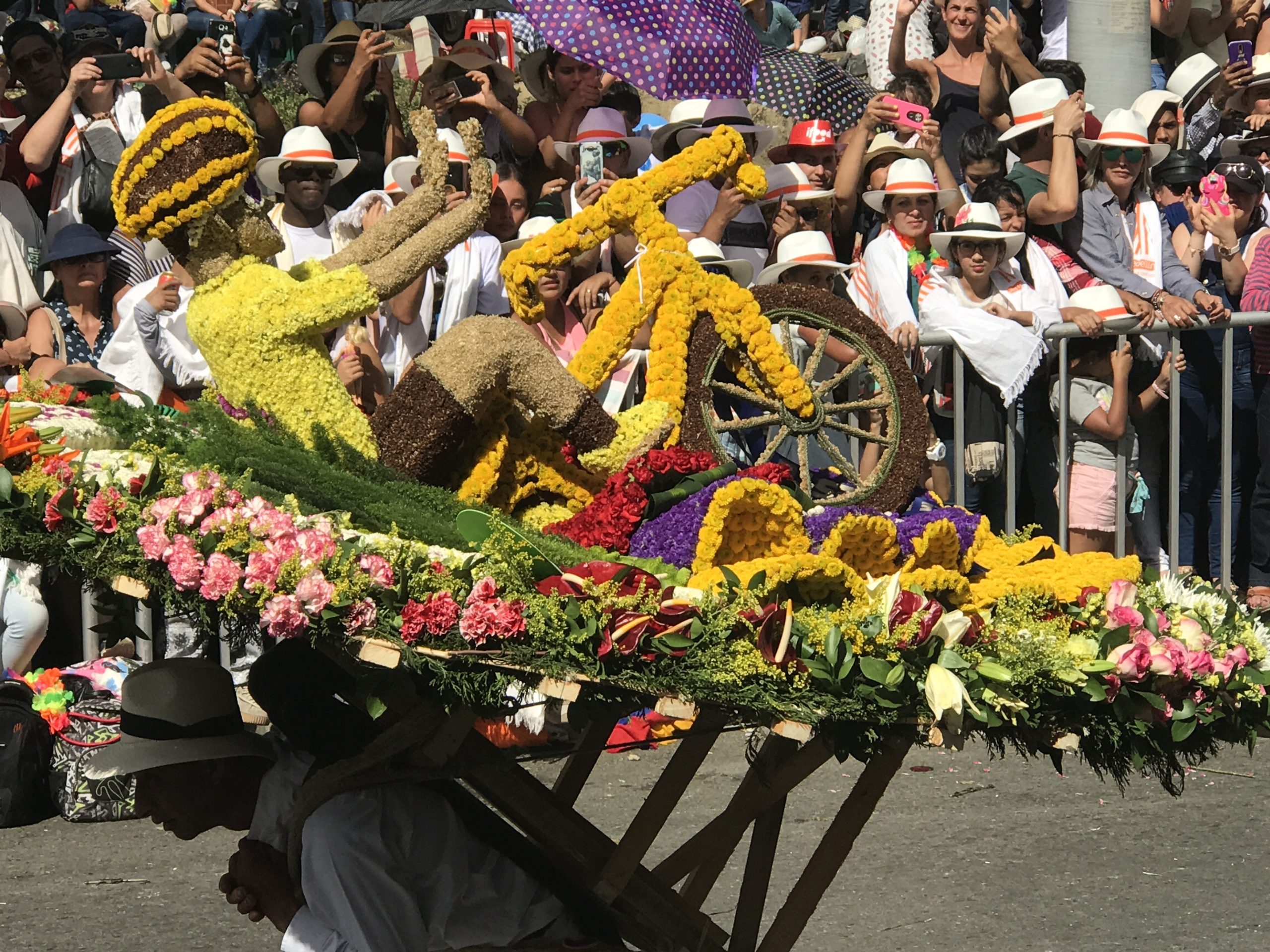 Members of the youth squads that marched in the morning parade return and walk back through the ranks of the silleteros offering cold beverages to them. Frequently, volunteers help remove a silleta from its carrier, and hold it alongside while the silletero takes a short rest before continuing along the route.

Silletas designed and assembled by commercial enterprises appear toward the end of the parade. Some promote local heroes, like Egan Bernal, the first Colombian to win the Tour de France earlier that month. Others advertise their business.  All are works of art.

The last of the silleteros passes by. Kevin smiling broadly, pinches me, “Yes, this is for real.”  We gather our belongings and along with thousands of Colombians begin our slow walk to our bus. Happy campers, the Desfile de Silleteros is everything I had hoped it would be… and more.