Senior Citizens Get in Free

Home / Senior Citizens Get in Free

Senior Citizens Get In Free 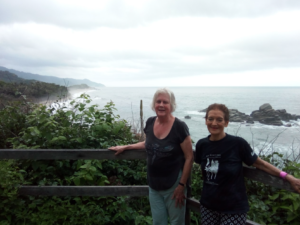 We were intrigued by Parque Tayrona: its mountains and ocean, monkeys and magpies, and treacherous trails.  It was not open to the public when we were volunteers but more than 50 years later, Suzanne and Margarita decided to go exploring.  We were the oldest and undoubtedly the slowest visitors Tayrona saw that Monday afternoon in November.  For Margarita there was no entrance fee, since she is a Colombian resident (almost a national) and without a doubt, a senior citizen.  If you are tempted to replicate this experience or, as PCVs,  blaze you own trails, we have one word of advice: “Throw caution to the winds!”

Against all odds and warnings we arrived in Cañaveral, the main entrance to the park, at about noon one lunes festivo.  During lunch in a local tienda across the road, it began to drizzle.  We entered the park at 1:30 taking the bus to the parking lot.  We felt prepared enough to take on a lion, although we certainly preferred monkeys and parrots. 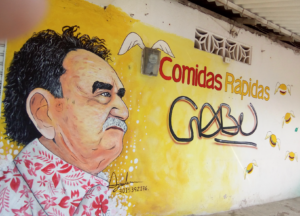 A young man selling ice pops oriented our hike.  The choices were trails A, B and C with increasing time estimates based upon the difficulty of the terrain.  Trail A was the easiest and, our guide assured us, would take no more than 45 minutes.  We were to begin in the forest, arrive at an elevated lookout point where the forest and the sea unite, and return to our starting point bordering the ocean.  The drizzle picked up momentum as we began our climb.  We could hear the ocean.  Suzanne was a heroine, with a sore foot, inappropriate shoes (not her fault, we didn’t know we were bound for Tayrona that day) and a walking stick.  Margarita had visited Tayrona several times before, but each visit was different.  The sound of the sea seemed to be our best orientation but the drizzle often gathered force, the ocean was no longer audible, and we were distracted by birds and monkeys—but, weren’t they just what we came to see?  The terrain was a constant up-and-down climb, the moisture making it very slippery.  After the first hour we began to worry.  The lookout eluded us.  The arrows and signs were scarce.  There was no cell phone communication even though we tried.  Should we advance or go back from whence we came?

With no confidence whatsoever in our decision, we went forward.  Arrows appeared out of nowhere.   We heard the ocean once again.  Rocks in the form of giant eggs marked highpoints on the trail.  We were learning to read the signs.  The trail forced us to climb even higher and the breaking of the waves seemed closer.  We found the lookout!  The drizzle stopped.  The view was worth the effort!  As we were taking photos, a barefoot visitor appeared—a fellow in his 20s from Maryland, traveling in Latin America.  We exchanged stories, took photos and recommended the Peace Corps to our new friend.  We shared his company for the rest of the trail—all downhill and bordering the beach.  We made it!  The 45 minute walk turned out to be two and a half hours, and we told our improvised guide that for us, times had to be adjusted.  We left Tayrona at five in the afternoon at the beginning of a torrential rainstorm.  Transportation was available.  We took the risk and reaped the benefit.  We were proud of ourselves!

The following day Margarita recommended a shorter trip to Bahía Concha, an alcove shaped like a seashell surrounded by the greenest of hills.  It is now part of Tayrona and, after a very long bus trip, including several false starts, we learned it would not be possible to visit Bahía Concha that day because the park was closed to the public.  We went to a neighboring beach in Taganga—very pleasant and relaxed since it was a weekday.  We had lunch on the beach, and later in the day we returned to Santa Marta to do some exploring.  The downtown malecón is in disrepair and few people make it their after-work destination.  This was our only incursion into downtown Santa Marta.  From then on we were faithful customers at the Zazué Mall near our lodging, with an excellent Crepes & Waffles.

The following day we took a longer paseo, to Palomino, a town in the Guajira.  Here a river flows into the ocean and the attraction is the point where the two bodies of water meet.  It is possible to take a leisurely float down the river in an inner tube, but Suzanne and I took a tuk-tuk and walked part-way until we came to the beach on the ocean.  The people from Palomino know the term tuk-tuk and are familiar with its Thai origins.  There was no swimming for us that day.  The ocean was cold and rough but the landscape, dramatic and beautiful.

The area is full of banana plantations and the next day our destination was Ciénaga, a Colombian heritage city, site of the massacre of the banana workers at the train station in 1928, an event of historical significance to which Gabriel García Márquez devoted the concluding section of One Hundred Years of Solitude.  A bicitaxi was our transport.  Even though Ciénaga’s main park was under renovation, it was easy to appreciate the city’s beauty both in geographic location—river and ocean—and extraordinary republican style architecture.

From Ciénaga we caught a bus to—where else?—Aracataca, two hours away and well worth the effort.  The town, also known as Macondo, was the home of Gabriel García Márquez.  The house he lived in has been restored and an immense rubber tree in the patio is a spectacle in its own right.  There is no entrance fee to the house, following the express wishes of the Nobel laureate.  The town seems to be prospering and fantastic business ventures abound.  An example: “Comidas Rápidas Gabo” featuring flying hamburgers (which we did not try).  Here too, the central park is under renovation.  We also visited the casa del telegrafista where Gabo’s father worked—and wooed Gabo’s mother.  The Márquez family, unsupportive of the romance, sent their daughter, Luisa, to visit relatives in other towns hoping she would forget Gabriel García.  But, of course, there were telegraph offices wherever she went, and communication was never a problem.

On our last day in Santa Marta, we returned to Bahía Concha.  The beach is still beautiful and the bathing a treat BUT, here it is obvious that Tayrona has been taken over by private interests.  Everything has an owner and every owner charges a fee—often overriding the arrangement the visitor thought she had agreed to.  Misinformation abounds!

The next morning, we parted.  Suzanne headed back to Barranquilla to visit Las Américas, her old PC site, as well as a godson and his family.  Margarita’s destination was her home, in  Cartagena, but an absence of transportation from Barranquilla, and a heavy rainstorm made the trip another adventure.  Adventure is Colombia’s specialty.  It was ours as well—perhaps not as daring or eventful as it had been when we were volunteers, but the magic and the mystery were still there, along with our determination to prevail no matter what the odds!