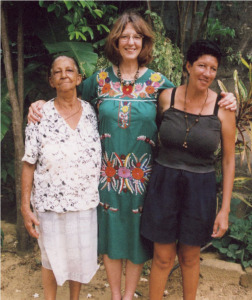 Comadre Ida and my goddaughter Clea

I want to say that Cárdenas was a good man who cared about Dibulla and that his death was a tragedy, that her uncle was a sinverguenza (without shame), that my friend Chave’s heart was broken, that I sat with her beside the body part of one night in a house cleared of furniture. I say none of this. Why burden her with old griefs? We visit Olimpia Coronado de Moreu, who with her husband Wilson owned a bus, general store, and the movie theater (now boarded up) where I used to watch U.S. westerns. They were first citizens of Dibulla but kept aloof from community development efforts. She’s in her eighties now, her face softer and more friendly than I remember. Wilson has died. Her daughter invites us in for coffee, but we decline. A cup of tinto would require slowing down to Dibulla time, a luxury we don’t have. I’m sweating profusely. My Mexican cotton dress sticks to my back. It doesn’t catch the breeze like the long, bat-wing Guajiran manta. In mestizo society the Wayuu Indians were considered inferiors. I had a few mantas made, and when I wore them I stood with the Wayuu in a small way that gave me satisfaction but probably compromised my status in Dibulla. Now, at last, we walk up the street to Ida Campo’s house. This is the heart of my visit. Ida speaks in the fastest, clipped-consonant Costeñan Spanish of anyone I know and is the hardest to understand. Looking around her neat tiled parlor I remember the mud house she lived in, the dirt floor she swept clean with a broom. I recall her father’s wake, my first wake, the shock of seeing people drinking, eating and dancing around the corpse laid out on a table. Ida keeps repeating, "Comadre, you’ve come." She doesn’t ask how I could stay away for so many years or why I didn’t write. My goddaughter Clea, almost my height, holds onto my arm. My eyes strain to see Ana, and slowly, from the shadows, she comes forward, a plump baby on her hip. We embrace and I begin to cry. I loved Ana the most, yet after a year with me I made her move home after she stole money from my mochila. The money was returned and I still saw her, but it was never the same. Ana is thin with finely etched wrinkles. Her voice is low and husky and she’s missing teeth. Yet she still looks like the little girl Ana. "I cried so when you left," she says. "Why didn’t you take me with you?" This is a surprise; was the subject even broached back then? Would I have taken her if asked? No. I married Bill Rayman, had children, moved around the world. Peace Corps was a two-year detour in the life I was meant to live. Or so I thought. 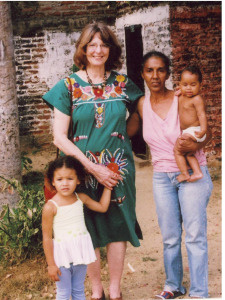 The baby is Ana’s granddaughter, one of two she cares for while her daughter attends school in Santa Marta. The highway has made an enormous difference but not, perhaps, for Ana. I ask, "How has your life been?" Ana lowers her head. "He sufrido" ("I have suffered"), she says.

When I first entered Ida Campo’s mud and palm frond hut in 1964, her daughter Ana was 10 years old—dark, slim, and quick to laugh. Now she’s 51 and stands gravely with a grandbaby on her hip. I sense that life has pressed her hard. I would like to be alone with her to talk, to listen, but we’re surrounded by friendly people welcoming me back to Dibulla after 42 years. Carlos, the cameraman, is taking video footage. His sister, Lilibeth, is interviewing me for television. My goddaughter, Clea, stands close. Ida’s relatives and friends converge. One hour in Dibulla and I’m drowning in sensation and memory. 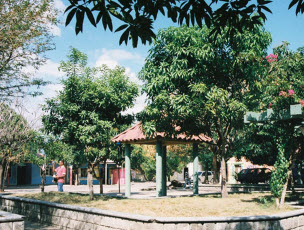 Ana tells me, “Voy a traer fotos de mi familia,” and after I assure her I will wait to see her photographs, she departs. But before she can return, Lili says it’s time for lunch, and we leave Ida’s. We walk a few blocks— where the street has been opened up for sewer pipe repair—and are welcomed by Rafa and Yuye, Lili and Carlos’s parents, heads of a big and accomplished family. We’re served cold drinks, and as lunch isn’t quite ready and as the cemetery is nearly next door, I excuse myself for a brief visit to what was once my shortcut to the beach. The graves are poorly maintained and crowded with stacked crypts and plastic flowers. I once photographed old Juana Bueno sitting on a crypt, legs crossed, eyes closed, chin resting on one hand. Juana liked the cemetery, too. Lunch consists of baby shark piccata, sancocho (soup) with yucca and tripe, broiled fish, rice, salad, and cold Coca Colas. As their grandchildren arrive home from school, Rafa, Yuye, Carlos and Lili greet them with hugs and kisses. After lunch I visit the family tienda at the front of their house. María asks for dulce de leche, a soft candy made of milk, brown sugar, and coconut, but they haven’t any, so I buy her a hunk of cheese to take home. We walk over to the plaza. Long ago the only gathering place in town was this open field between a row of small houses and the imposing stucco church. PCV’s and people from local government could set up in the field to show films on public health or community development, and folks would bring chairs with them or sit on the ground. Now it’s a real plaza with trees, stucco planters, benches, and a gazebo. A sign on one wall warns against public urination: Tenga cultura no se orine el parque! Padre Bernardino’s church still stands, but a modern new church has been erected next door, with open sides to catch cross-breezes. We do a sit-down interview on the church steps. By this time my Spanish has gained fluency and I’m more comfortable answering questions. Children sidle up to watch; otherwise the plaza is empty during the heat of the day. We proceed to the old abattoir, now an education office, and the police building, which stands behind a high cement wall. There’s a badly neglected basketball court and beyond that the Dibulla River, in which a woman stands thigh-deep washing clothes and a man on shore slices a bicycle tube with a very sharp knife. Howard Converse, my first Dibulla partner, thought the town had great potential as a resort, and there does appear to be some progress—a couple of beachside cafés and shady cabañas. The cafés are closed but I can imagine lingering in them over cold beer and fried fish. I wade into the river, dipping water onto my wrists and neck. The Sierra Nevada de Santa Marta is hidden by clouds. A bicyclist with a small boy on his crossbar rides slowly through the river shallows. 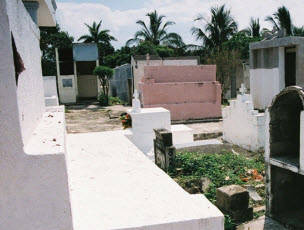 Carlos announces that the town mayor has returned after meeting with President Uribe in Santa Marta. A childhood friend of Carlos and Lili’s, el alcalde is young, educated, and ambitious for his home town. We’re invited to his office, where he listens but says little, seeming to take my measure. Finally, I ask him if there is anything I can do for Dibulla. He has the answer ready. “Tell people Dibulla is safe and a good place to come for a vacation.” I wonder how much infrastructure there is even now for tourism, but I know I would go to Dibulla for a vacation—string up a hammock and stay, watching the sea by day and the stars by night. I say I will spread the word. I’m worrying about Ana. We’ve been gone for an hour and a half and perhaps she will think I’ve left without saying goodbye. So we return to my comadre’s house, where María again asks what I am going to do for my goddaughter. Ida chimes in gaily that I must take Clea to the U.S. I don’t tell her that this is impossible. It’s obvious that someone with reduced mental capacity like Clea is best off in her home town, surrounded by relatives and friends who love her and will protect her. 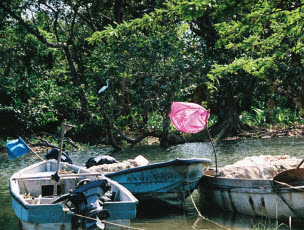