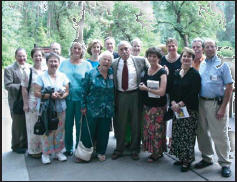 From August 4-6, 2006, my Peace Corps training group held its first reunion since leaving Colombia in the summer of 1966. We met near the beautiful waterfalls and shadows of the mountains in Yosemite National Park. Why there and why now? During the summer of 1964, about 70 of us gathered at the University of Missouri-Kansas City in June. Three months later 52 of us flew to Colombia, spent a few days in Bogota and then took off for our site assignments. Although we had two in-service meetings while in Colombia, this past August was the first time since the sixties that we had met as a group. When we came together, we reminisced, caught up, met spouses and partners and, of course, downed a little aguardiente. We were able to celebrate our shared experience, mourn those who had died, talk about the impact of our lives in Colombia and in the Peace Corps, and learn about how our lives had unfolded over the past 40 years. We did a lot of laughing and a lot of sharing of stories, pictures, information and hugs. For all of us, both our training experiences and our time in Colombia left a lifetime of memories and changed our lives forever. The reunion gave us time to reflect on our experiences and to share in them. Sometime in the summer of 2005, I was lucky enough to reconnect with a member of our group on a trip to Washington. Arleen Cheston (Stewart back in 1964-66) and I met for lunch while I was there visiting my son. It was either from that lunch--outside on a beautiful Washington D.C. afternoon--or soon after that Arleen and I hatched the idea of a reunion for our group. Arleen, President of Friends of Colombia, was able to supply me with contact information for about 30 of our 52 RPCVs. We sent letters and e-mails in fall 2005 and received enthusiastic responses and additional contacts -- from all over the country and from Chile and Mexico. We decided to hold a reunion somewhere during the summer of 2006. One long, typed response came from Virginia Tindall, who had been a member of our group along with her husband Art. Art sadly had passed away, and Virginia was now over 90. She wanted to be part of the reunion but was unable to travel. Virginia and her granddaughter lived in a small town in California close to Yosemite National Park. To honor Virginia and to ensure that she could attend, we made arrangements to hold our reunion at Yosemite a perfect location we all agreed at the end of the weekend. About 15 of our group came, along with about 10 spouses/partners, to Yosemite for the weekend of August 4-6, 2006. The first night we met over empanadas, aguardiente, and other Colombian goodies and reconnected. Many people had brought along DVDs, pictures, and other remembrances. Robert Arias, one of our group and later a country director for the Peace Corps, brought some T-shirts and bumper stickers made for our reunion, along with a DVD message especially addressed to us from former Peace Corps Director, Gaddi H. Vasquez. It was also very exciting to hear from Arleen Cheston, in her capacity as President of FOC, about FOCs ongoing activities and projects. Our conversations, serious and full of laughter, went on for hours The next morning began what went on throughout the weekend. We met in small groups to eat and then sightsee. We walked; we took our cars or tour buses to sites within the park. We had our cameras going all weekend, with the extraordinary scenery forming the backdrop of many of our group photos. Saturday night as a group we held a rather formal dinner at the world famous Ahwanhee Hotel in the Park. Our honored guest, Virginia Tindall, came with two of her granddaughters. Virginia and Arts granddaughters were able to see, for the first time, wonderful forty year old pictures of their grandparents joyfully dancing the cumbia, in costume. So what did we learn from our time together in Yosemite? I think we learned that, nearly half a century later, our experiences together in training and in Colombia still resonated for us and united us the Peace Corps remained a profound experience in our lives that was joyful to recall and to share. We learned that we could begin where we had left off and reestablish relationships and friendships from those days. We learned that for almost all of us, the Peace Corps was a catalyst for lives of public service both in the states and overseas. We learned that Colombia held a special place in our hearts one that we wanted to continue to support through FOCs projects. And we learned that we wanted to continue these reunions, now that we had met at Yosemite. I can't say strongly enough what this reunion has meant to me and to so many others. I hope your group will do it. Don't wait 40 years if you can help it. 2006-12 FOC Newsletter