Home / Returning to Colombia 2019
By Kay Dixon, Colombia III (1962-1964) We grin at each other; I gently squeeze Kevin’s hand. The pilot announces, “We are making our final descent into El Dorado International Airport, Bogota, Colombia.” We are nearly there, returning to Colombia where our relationship began more than fifty years ago. Colombia captivates both of us. This is our third return visit to our magic kingdom. It’s nighttime in Bogota, just as it was when I arrived with Colombia 3, my Peace Corps group (seventy of us) in the fall of 1962. Our airplane circles down onto the lighted runway. Through the window, just as previously, the city lights twinkle across the vast blackness. The plane bumps down onto the tarmac, the airport jetway connects our plane to the terminal. My first plane ride to Bogota was not this way. Half asleep, we all gathered our belongings and lumbered down wobbly airplane stairs. As we dragged ourselves across the tarmac, boisterous cheers rose up as the earlier groups of Peace Corps Volunteers in Colombia welcomed us. Tonight, an attendant greets us and whisks us through Immigration and Customs. Outside the terminal, we meet our driver. Soon we are darting at high speed among cars, trucks and vans down the freeway into the city.  It’s late at night but the traffic is still heavy. Our driver points to a Transmilenio BRT (Bus Rapid Transit) station with a long queue of people. “This is new?” we ask, admiring the sleek modern platform adjacent to the freeway. He confirms it. 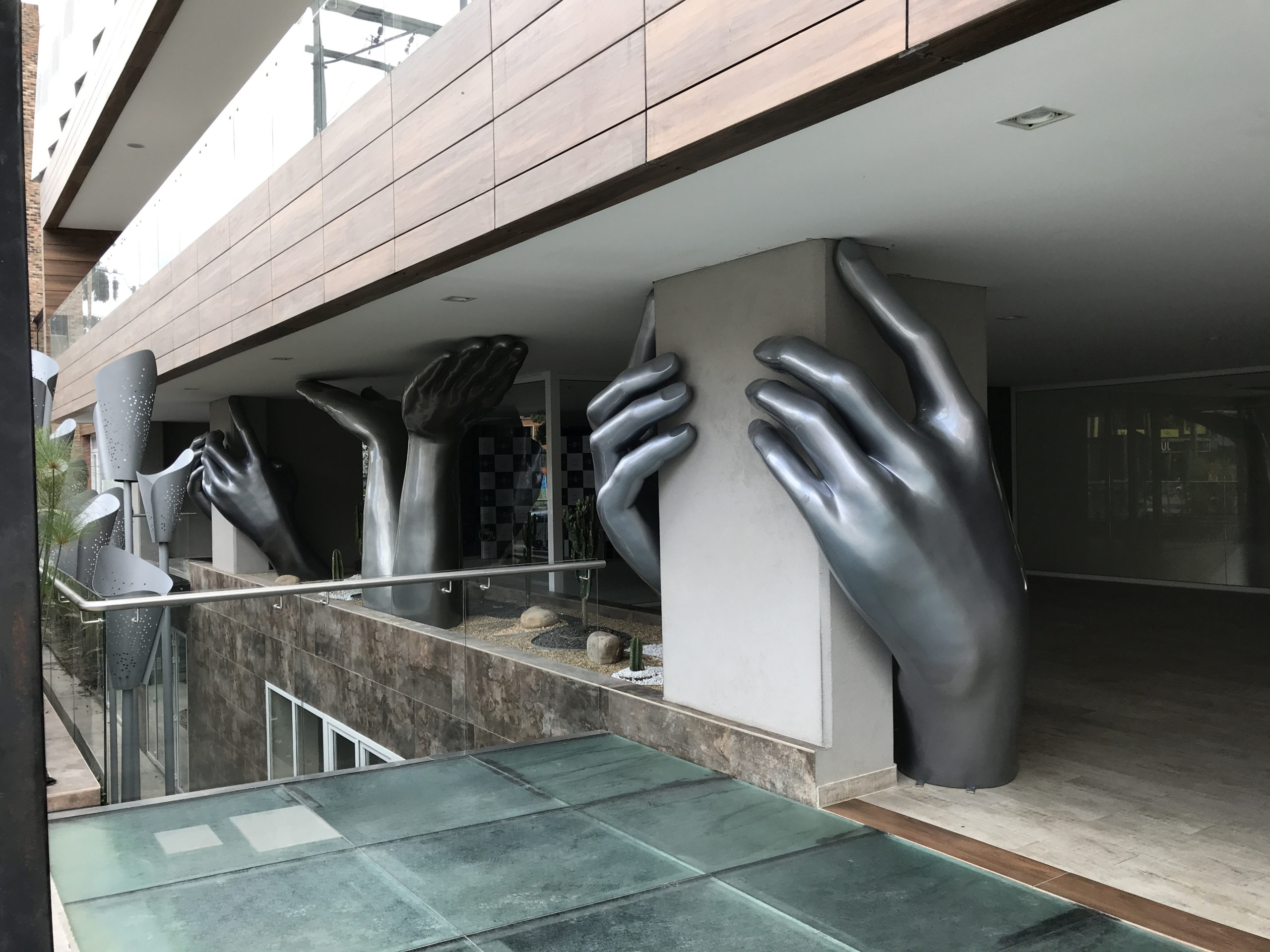 Building near the Hotel Sofitel, Bogotá

Soon we turn away from the center of the city into a suburban neighborhood en route to our hotel. The driver stops beside a desk, chair and open patio style umbrella under a streetlight. Two uniformed men greet us, “Welcome to Hotel Sofitel.”  Gold braid and brass buttons accent their elegant black tuxedos with matching top hats. They gather our luggage as they direct us down a broken sidewalk next to an open road construction project.  “What is this?” we wonder as we step over the concrete slabs avoiding muddy puddles and road ruts. Some things never change, we think. We may be staying in a nice part of the city, but construction is ubiquitous. One of our daughters is arriving in a few days and her first impression will be a construction project. She is a world traveler. We are anxious to show her Colombia.  Construction projects are not unknowns in our family, having lived in Saudi Arabia for five years when the whole Kingdom was one massive building boom. I am just sorry this will be her first impression of Colombia. When planning this adventure, as always Kevin’s thoughts turn to food. He drools thinking of “Beef steak a caballo,” his favorite Colombian meal. Well done grilled beefsteak with a fried egg on top. Just thinking of this combination creates unpleasant spasms in my digestive system. The hotel’s breakfast buffet showcases Colombian fresh fruits, cheeses, delicacies - a gastronomical delight. There is even an omelet chef. But Kevin is not interested. He asks for the breakfast menu. Our young server provides it.  Kevin studies the offerings, then turns to the server, “I don’t see beefsteak a caballo here.” The server is puzzled. He has no idea what Kevin is asking. Does Kevin’s poor Spanish perplex him? What kind of a dish is this, steak on a horse? In Spanish, I explain the dish to him. “Un momento, por favor.” He returns with the chef who knows exactly what Kevin is requesting. Shortly Kevin is served his beefsteak a caballo. Kevin notices that the server’s name badge shows his given name is also Kevin. Kevin shares that is his name, too. The connection is intimate and immediate, hermanos brothers. Three days later, departing the hotel, the hotel wait staff surprise us with a small going away party including parting gifts.  Friends and family are inherent to the Colombian people. Our first full day in Colombia is Sunday, a great day for a walk. The air is cool and the sun is shining.  We smile and greet people walking on the side streets among the modern high-rise brick condos, office buildings and pocket parks. This is not the Bogota I remember. Previous visits, the weather was rainy and dismal and its neighborhoods were not safe places to walk about. We reach a nearby eight-lane boulevard; the wide landscaped park median separates the traffic moving in opposite directions. At the corner lights, we pause.  As the light turns red, traffic stops and several young boys jump onto the street waving shammy cloths and aerosol cans of window wash. Drivers signal them to their cars. The teenagers rapidly clean the windshields, step to their open windows, collect the peso for their work and sprint away just as the light turns green. The next time the light turns red, a troop of three acrobats and jugglers and one aerial artist bolts into action for their audience of stopped vehicles. Their performance is perfectly timed to the rhythm of the lights; just as the green lights are about to appear, one of the troop moves down the lanes between the cars holding his hat as passengers drop in their coins. Ah, the ingeniousness of the Colombian people. To introduce Bogota and Colombia to our daughter, we have arranged a guided full day city tour. We begin at the public market, wandering among the maze of stalls showcasing the variety of native vegetables, fruits, meats, fresh fish and flowers available – a country with copious amounts of locally produced food. Traveling through the city, the street art sculptures and colorful murals decorating buildings and corners charm us. Clearly, the city is upbeat. 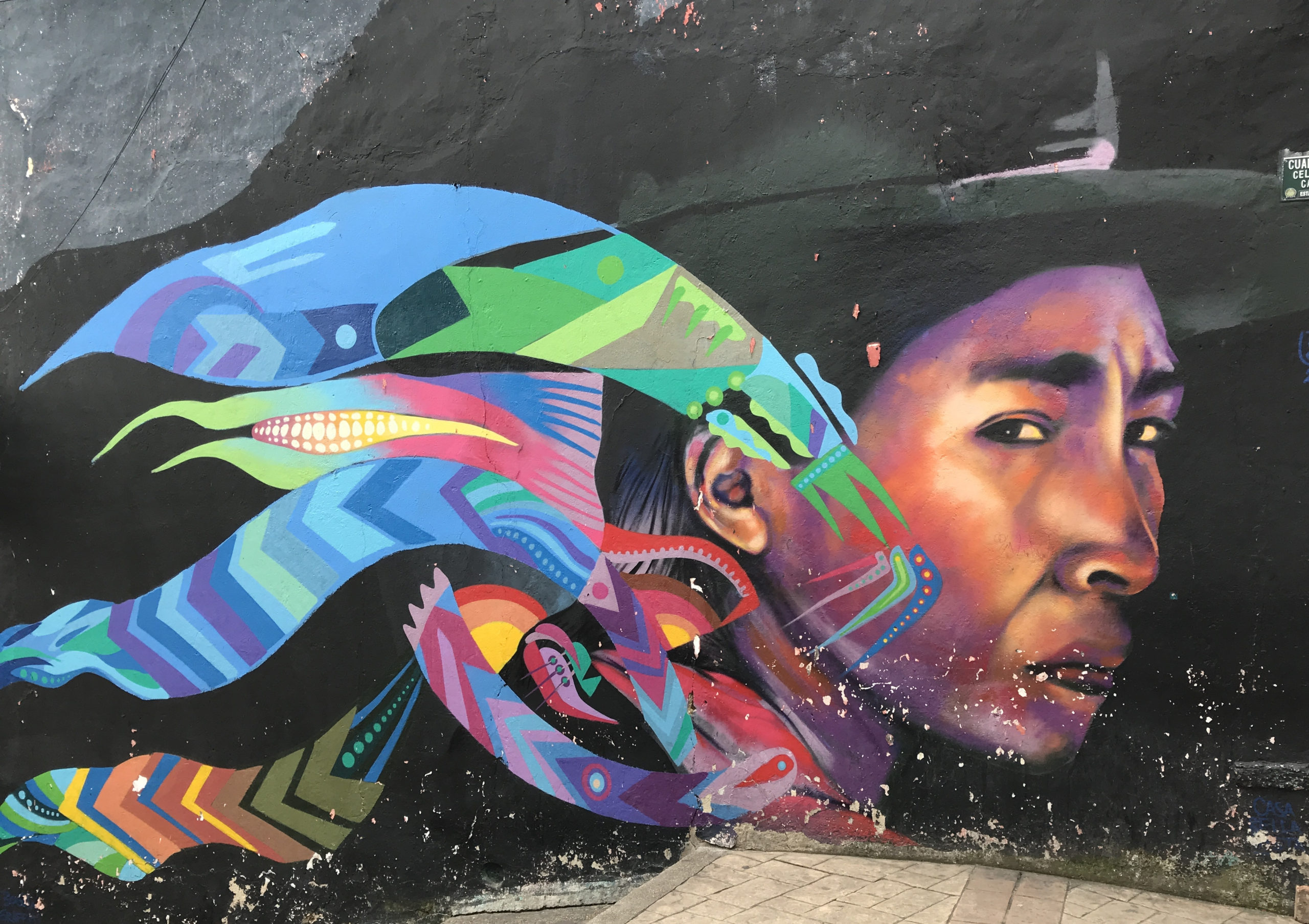 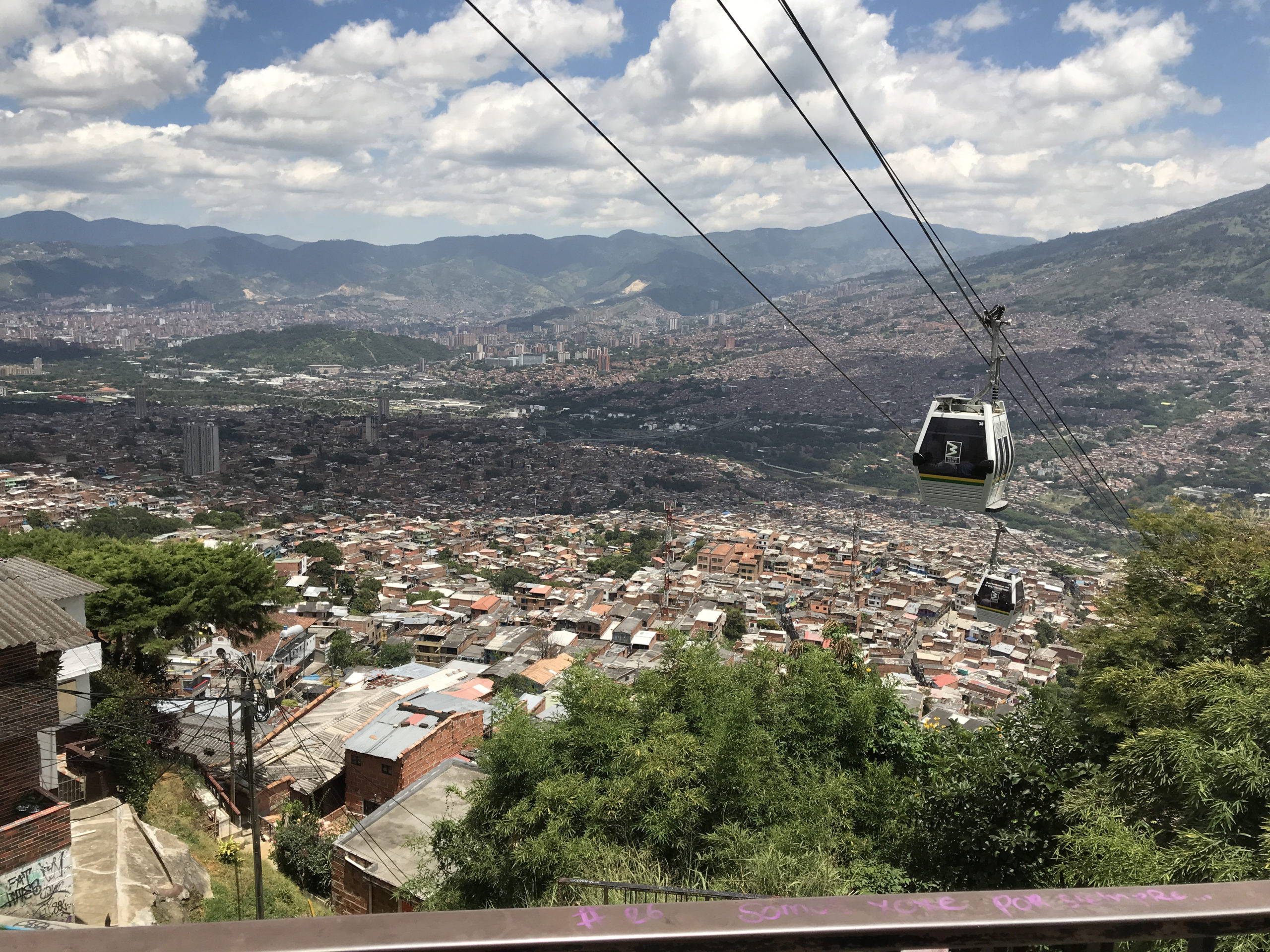 The city of Medellin has an extraordinary comprehensive transportation system: two rail lines, a tramcar line, five cable car lines, and hundreds of small feeder metro buses. It is the only rail-based Metro system in Colombia. The system bridges the disparate poor city and rich city quarters. Now the people living high in the mountainside barrios can use the cable cars to commute to and from jobs in the city center. The fare is minimal for a round trip ride. On this visit, we saw government supported community centers successfully operating in lower class neighborhoods.  Multiple local programs initiated to protect and enrich the lives of Antioqueno youth are ongoing. Barrio Comparsa, developed in the 1990s, offers programs to enhance creativity and to function with other people and with the natural environment. Currently Guatemala and other countries in Central America are replicating this model. At the height of the violence (1990s), the Medellin Mayor’s office initiated a music program for young people within its poorer neighborhoods. The program was designed to minimize teenage gang activity. Now 26 schools across the city offer free music lessons on week day afternoons. Students attend regular school in the mornings and in the afternoons are bused to one of the music schools.  There they have the opportunity to develop their musical talent, either vocal skills or to learn to play a musical instrument provided by the school.  Regular concerts are held where the students perform for their families and friends. More than 4000 students currently participate in this program. Today Medellin is recognized as a tourist destination. More impressively, Medellin is identified as one of the best places in the world to retire (World’s Best Places to Retire, International Living 2018).<(p> Colombia is a very special place to Kevin and me.  We met here as PCVs nearly sixty years ago — wide-eyed, optimistic and naive — responding to the challenge of what could we do for our country.  To return and see how, despite multiple hardships, Colombia has developed and is thriving, we felt our minuscule investment richly rewarded.   Peace Corps Connect’s Next Step Travel program planned and coordinated our trip.  Arrangements were made with www.TrueColombiaTravel.com.  Incidentally, two former Peace Corps Volunteers formed this agency.   Kay Gillies Dixon served as Peace Corps Volunteer in Medellin, Colombia, from 1962 to 1964.  Kevin Dixon, her spouse also served as a Peace Corps Volunteer in Colombia. His first year placement was at the University of Antioquia in Medellin; in his second year, he was placed in Santa Marta. Kay published her memoir Wanderlust Satisfied through the Peace Corps Writers. Copies are available at Amazon.com